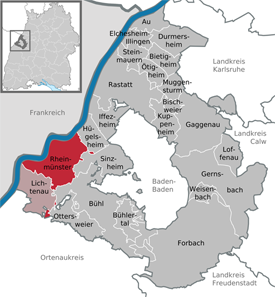 Rheinmünster is a product of local council reform. On the 1st October 1974 the former independent councils of Greffern, Schwarzach and Stollhofen, from the former district of Bühl, and Söllingen, from the district of Rastatt, were amalgamated to form this new community. It would not be quite right of me to say that this amalgamation took place of our own accord. The process was long and complicated and it will certainly take a whole generation before a complete and unconditional integration of all parts of the area into the new Rheinmünster community is achieved. The pressure “from above” was particularly great, but their procedures for managing the integration were followed to the letter and made it possible to finally arrive at a mutually successful outcome, namely the new council of Rheinmünster.

The name “Rheinmünster” says a lot about the community in itself. On the one hand there is the Rhine (Rhein), which forms a 12 km long boundary, and which has shaped the character of the people living along its banks – providing them with food and work, as well as troubles and sorrows. On the other hand there is the Cathedral (Münster) in Schwarzach, which is all that remains, along with a few small domestic offices and the monastery gateway, of the Benedictine abbey that once distinguished and dominated this area, but which fell victim to secularisation in 1803. It was therefore fitting that the Rhine and the cathedral (Münster) should be included in the name of the new community. You will find out more about its coat of arms as well as about the Schwarzach cathedral later on this site.

Rheinmünster, a “product of reform”, is in a perfect position to prosper, grow in stature and become an important community in the centre of the Baden region. Above all, Rheinmünster is exceptionally well positioned in terms of transport, situated between the two large cities of Karlsruhe and Strasbourg, near the Rhine valley motorway (4 km away) and adjacent to the federal highway 36, with excellent road connections to the nearby towns of Rastatt, Baden-Baden and Bühl where most of the population work. The Bühl-Rheinmünster railway line provides rail connections, which is just as important for the commercial and industrial development of the district as the harbour at Greffern, which provides access to the vital waterway of the Rhine.

Another aspect that benefits the development of this young community is the regional development plan. This plan envisages the creation of a sub-centre for Rheinmünster together with the town of Lichtenau in the centre of Bühl, along with inclusion in the Bühl-Rheinmünster/Lichtenau-Haguenau/Bischwiller/Alsace development project as part of the “Mittlerer Oberrhein” (Central Upper Rhine) regional plan. The Rhine ferry at Greffern is given special status as part of this project. This plan should provide Rheinmünster with the resources it needs to create additional housing and work places.

A third factor that promises a bright future for the community is its strong financial situation, which is based on two main aspects. The industrial plant established in Greffern by The Dow Chemical Company in the 1960s, together with some smaller industrial and commercial enterprises, provides significant commercial tax revenue. The two gravel works, although they have some effect on the environment, also provide the community with a considerable source of income. Immediately after its amalgamation, Rheinmünster chose to focus on certain key areas for its future development: – Sewage disposal for all areas using a mechanical-biological treatment plant. – Development of new building areas that had already been set up and creation of additional new building areas in all four sub-districts. – Bringing the decentralised administration created by the amalgamation under one roof (Town Hall). Contrary to all the gloomy forecasts in the first two years after amalgamation, the community council and the communal administration had achieved these objectives by 1980. This was a great success for our young community, which is now able to continue to make small steps towards systematically improving the quality of life and infrastructure in the region, making this a great place to live not only for native inhabitants, but also for those coming from outside. It will be interesting to see how the conversion of the former NATO airbase in Söllingen affects the district and its inhabitants in the future. At the moment, we can only refer to a district council resolution of 6 December 1993, which outlines plans to build a business park and a regional airport on this site. There are also plans for a range of sports facilities, including an 18-hole golf course, an archery range and an ice rink.

At the turn of the years 2000/2001, the Flughafen Stuttgart GmbH (Stuttgart Airport Company) took over the Baden Airpark and thus created the conditions for further developments. From this website you can see that Rheinmünster is an excellent place to live. It offers excellent medical facilities, educational establishments in your particular town or in the immediate vicinity, numerous craftsman’s workshops and service enterprises, a number of excellent leisure facilities, such as the indoor swimming pool in Greffern, an active network of associations, as well as beautiful countryside with its mixed woodlands and Rhine meadows, which have unfortunately undergone considerable felling as a result of Rhine damming measures. But you can still find unspoilt countryside in many corners of our district, which it is our duty to preserve. The ostrich farm “Mhou” – the first of this kind in Germany that can be also visited -has acquired international recognition for its true-to-type bird keeping. It is located in Schwarzach and enjoys the almost Mediterranean climate of the “Upper Rhine Depth”. Ostriches can be admired here while grazing on large areas.

According to the regional computer centre, as of 31 March 2000 Rheinmünster had 6,482 inhabitants, 3,304 male and 3,178 female. They live in Greffern, Schwarzach/ Hildmannsfeld, Stollhofen and Söllingen. Population growth in Rheinmünster and its four conurbations has been quite low until quite recently, but this has been increasing over the last few years thanks to the development of new building areas. By providing over 800 new jobs, the Rheinmünster site of The Dow Chemical Company has certainly contributed greatly to this, as many of its workers have chosen our community as their home. Above all, the withdrawal of the Canadian armed forces has led to an influx of over 800 “new citizens” over the last few years. But an historical overview of Rheinmünster would not be complete without a look at the history of the origins and development of its four main parts: Greffern, Schwarzach, Stollhofen and Söllingen.